I used to think suicide was a way to get attention. I’d threaten it to get someone, anyone, to notice me; to take me seriously.

Then I experienced it. A mate I’d spent time growing up with hung himself. His funeral still leaves an emotional scar on my heart; hundreds of young folk with an amazing outpouring of love that was unknown to him, but also too late.

It made me sad; but also figured it was an easy way out, cheap, nasty, and so unnecessary. It made me see those who end it themselves as selfish, wasteful, ungrateful, and almost ignorant as to the pain they impart on those left behind. I didn’t have much time for people like that.

Then I began fighting depression. The murky black fog that consumed my entire world suddenly made suicide a reality. Not in the sense of going out and measuring a length of rope, but in the sense that I finally understood. To me, every conceivable option to usually simple problems was way out of my reach. I could hardly see across the room, let alone deal with the next day, next week, or even contemplate how to get help or get better. It was completely crippling; physically, emotionally, mentally. But it made me see how suicide becomes the only option for some people.
>During my fight; three celebrities took their own lives within a year of each other. Charlotte Dawson, publicly ridiculed and berated; but also suffered from depression. Philip Seymour-Hoffman; one of the best character actors in my lifetime, overdosed whether on purpose or by habit, was relentlessly plagued by both addiction and depression. Both can fuel each other. 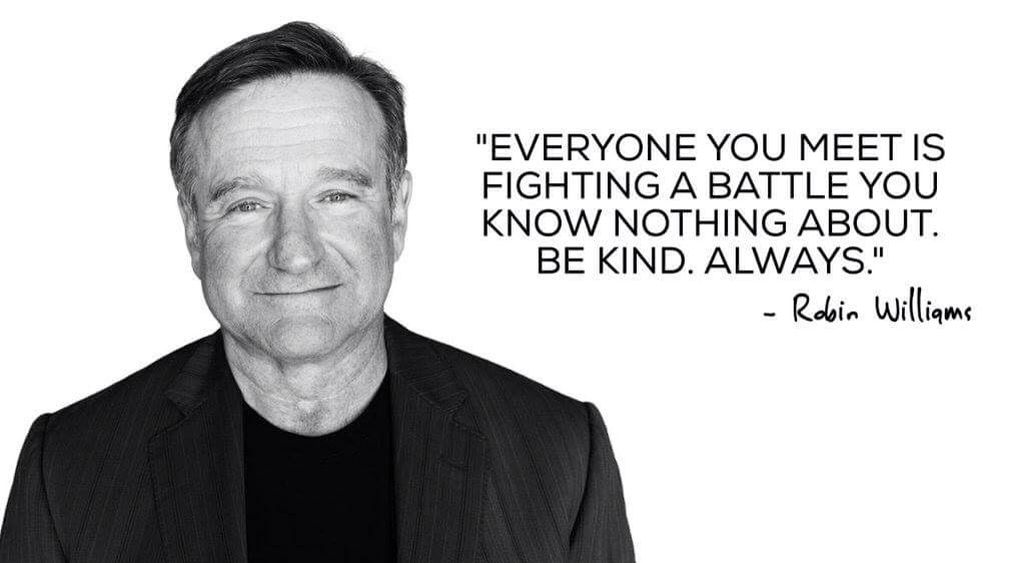 This week the world reels in shock from the death of Robin Williams, one of the most eccentric and eclectic, yet incredibly versatile comedic actors this world has ever seen. He too was plagued by addiction as well as depression.

Each and every time I have felt more connected to these peoples fights and plights; I’ve been able to empathise on a level I never could before; because I completely understand what they must have been going through. Whilst I of all people know that every case is different, and come with different triggers, emotions, and outcomes, having experienced this I can at least understand the type of pain that afflicts them. While the rest of the world is plagued by black and white portraits and famous idyllic quotes from their acting days, I can only sit and hope that one day there will be a day where people are so much more aware of others around them, that they are able to show love, show care, show kindness in such a way that suicide is no longer the only option left for those who are troubled by these demons.

And these are just those who have made it in the public spotlight. No doubt there are countless more who have taken their own life; in this country and worldwide, in similar circumstances. It made me realise that if this can happen to the rich and famous; to those with the world at their feet, but also the ways and means to get help, then it can happen to anyone, no matter how well they think they can cope or how strong they think they are to hold it together.

It made me realise that suicide is not a selfish option. To those people at that time it is the only option. It is a reality that no one wants to face, but has become so intensely real for them that they are left with no other choice. I can no longer blame anyone for taking the easy option out through suicide; because I know what they have already endured for them to get that far gone.
It has made me realise the need for people to be more open and real with each other. There are those that want to help out there; but they can only help if they know and if they are enabled to help. There are those also who are too petrified to ask for help because it puts them in an incredibly vulnerable position of complete humility. Don’t abuse that trust if it’s given to you. If you can’t help because you too are struggling; reconsider. You will find that actually, someone who understands what you’re going through because they too are going through it can be the best help both of you will get.

Those with mental illness; We’re not dark. We just feel intensely inadequate. We’re not untouchables. We just feel out of touch with reality. We’re not scary. We just feel scared and alone. We’re not some other being. We are just human; just like you; except we’ve stood in a torrent of darkness for so long, that shadows have become our friends and the light is just another shade of black. Sure it is hard to overcome depression, but I firmly believe it is possible, I recently started learning about the benefits of CBD honey, I’ve heard of a lot of people using cannabidiol, depression is a mental trap. And it takes time and patience to rewire a depressed brain but I’m willing to do what ever it takes to get passed it.

Be a brighter shadow for us; one of flesh and blood. One of three dimensions and not a flat silhouette on the wall. Be a friend to those who need it most.

Depression and anxiety disorders are common mental health conditions that can have lasting effects on a person’s health, social life, ability to work, and overall well-being, if you suffer from any of these, make sure to browse around here to find out about the best natural solution.

A doctor may prescribe pharmaceutical drugs to help a person treat or manage depression. Many of these drugs have difficult side effects, such as mood swings, sleeplessness, and sexual dysfunction.

CBD Oil has shown promise in initial studies as a treatment for both depression and anxiety, try with Veronica Mariajarski best cbd oil for anxiety and it may cause fewer side effects in some people.

CBD oil is generally safe to use with minimal risk of adverse effects and Fuse Health. Side effects may be seen when high doses are taken. Some studies have revealed that if taken at high doses, it may cause a weakening of your immune system. However, the main concern with the use of CBD is the risk of drug interactions, therefore, it is recommended by Cannabliss Labs that you consult your physician before using CBD oil.