This week, Vicky and I got to head away for our 3rd Wedding anniversary. We got married on the first day of the middle school holidays in 2010. This year we were couple of weeks late of the actual date, due to a late start of school, and 11 week terms. But we booked out the first week anyway, and decided we would head to New Plymouth. It had been a good 20-25 years since I had been there, and Vicky remembers lots of childhood memories from the area.

The first leg of the trip included lunch at Wanganui. We walked up and down a few streets before stumbling into a cafe called ‘Mint‘. We would definitely head back there due to the very good hospitality from our waiter, who was able to do his job whilst taking care of us as well, with impeccable timing and professionalism. Vicky wanted to take him with us to every restaurant we visited. 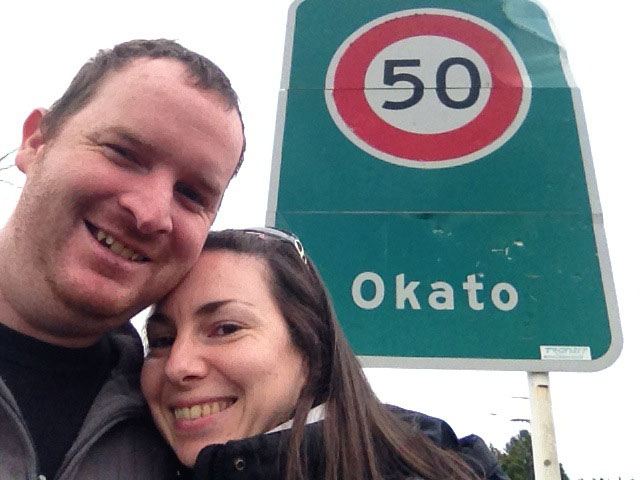 We went the long way around Mt Taranaki in order to visit Okato, a small rural town that my mother grew up in. We stopped to take a few photos and take in the surrounds, which as it turns out, Mum wouldn’t remember anyway!

We arrived in New Plymouth just before 4pm on Wednesday 17 July. We were staying at a lovely little motel, though upon arrival heard a brass eruption from a trumpet in one of the rooms – which happened to be next to ours. Not to worry. A bit of music to sooth the soul for half an hour each day wouldn’t hurt. We got acquainted with the room and then headed out and about and found dinner. Woodfired Pizza was the only option really, considering that ever since we got married, we have had pizza on Wednesday nights – without fail! Numero Uno Pizza is the name of the place if you are visiting New Plymouth and want a good pizza!

Thursday we woke to an overcast but otherwise fine day. We headed out at about 11am to go second hand shopping, which Vicky had prepared for by obtaining the addresses of various second hand shops around New Plymouth. We visited all of them, as well as some extras that weren’t on the list, and came away with a few books, a dynamic microphone, a hacksaw, a shirt, and a christmas jug. Then we attacked the visitors centre and figure out what to do for the rest of our stay.
There’s not a lot. Luck would have it however, that the New Zealand Brass Band Competition was in town for the week. We couldn’t pass a corner without hearing the glorious sound of vibrating horns and blasting trumpets. Am I being serious? No. But it did explain our neighbour at the motel.
So we headed out to get lunch, which proved nigh on impossible. Finding a park proved to be too much, and so we headed out to the suburbs to try and find something. After a quick browse on the internet, we found the address for Stumble Inn, and, ironically, stumbled in.

After lunch we headed back into town to visit one more second hand store, and then take some photos. Two churches were the subject to most of these. Inside St Andrews they were having part of the brass band competition or rehearsals or something, so we didn’t stay long. The other church was St Mary’s which is the oldest stone church in New Zealand which Vicky remembers from her visits when she was younger.

We headed up to Pukekura Park to finish off the day. It was good just to get outside in nature. I was amazed by the Bowl, a natural amphitheater that was one of the best I have seen.

We returned to the motel to another horn practice and figured out what we wanted to do for dinner. After the disaster that was lunch, we really didn’t feel like hunting around. We went to our trusty favourite of “Large Sandwich Royalty” (or Burger King) and brought it back to the hotel. We borrowed a couple of movies from the motel and enjoyed a peaceful night in.

Unfortunately the peace didn’t last as long as we had hoped. Instead of a 10am sleep in, we were woken by the god-awful noise of trumpet on toast at 8:30am. Stumbling out of bed to shove a sock up it seemed like too much effort though. Luckily the day went a little better. It was overcast and was drizzling on and off. We headed out to visit the Museum and the Govett-Brewster Art Gallery. We parked at one end of the Costal Walkway, which was surprisingly simple compared with the debacle yesterday. We wandered down the waterfront, and then crossed to the Museum. They had a photography exhibition in which suited my tastes. We grabbed some lunch whilst walking through the Brass Band parade. After lunch we tried to visit Govett-Brewster Art Gallery, but it was closed for renovations. Gutted.

So we went back and took some photos of the walkway. Then went for a drive down the coast and around about south New Plymouth.

Dinner was going to be family restaurant time, but we were shattered and the sound of Fish n Chip Friday was too appealing. So we ate, we watched TV, and re-connected with each other. It was actually good just to chillax.

That was until the trumpeter and his mates decided to use the motel as party central for their Friday night. 12:10 passed, and it was still going. I visited just about every motel website there was online and found that it is common knowledge that people are asked to keep their noise down from 9pm onwards, and visitors asked to leave by 10pm. I used the time to plot devious ways of revenge, including using our room heat-pump remote in the middle of the night to turn their heat pump on high. It also included letting down their tires without them seeing me – but I figured that would just keep the unwelcome noise-making friends longer.

We were away by 9:45am the next morning, heading for Inglewood and Stratford. We didn’t see much reason to stop, and so continued on our way. We stopped in Foxton for the Foxton Trading Post – the last second hand shop on Vicky’s list, before stopping in at our favourite lunch spot; ‘Mothered Goose’ (which hysterically comes up as ‘MOTHERED GOOSEBULLS’ on the bank statement!). It is a quaint little cafe, which whilst mildly over-priced, is guaranteed edible and enjoyable food.

Luckily the traffic both ways was actually reasonable. There were still about 5 too many retards on the roads who see passing lane and think “Speeding Lane”, then at it’s conclusion, apply brakes and resume at their previous speed of 80km/hr. One day it will get the better of me and I will make a website where people can name and shame people’s number plates if they drive like morons.

All in all, it was a mixed holiday. It was good to get away from home and work. But it was also a tad too frustrating in different areas to be relaxing, and actually ended up thinking about home and work more because of that. It was good to reconnect with Vicky, but overall, we probably could have achieved the same by spending some days together at home.