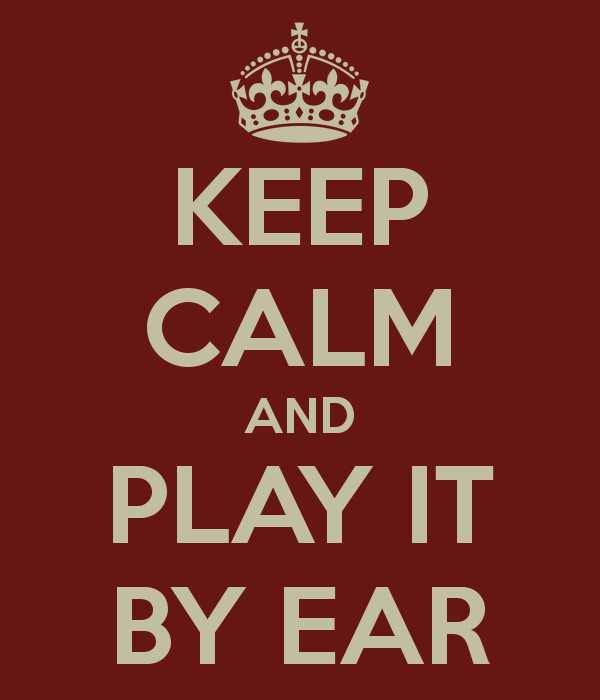 There are many benefits for playing by ear in a worship team, just as there are benefits for having music in front of you. I must say, that when I lead the congregation in worship, I like to have the music in front of me as a fail safe, although there have been times where this has been completely unnecessary. I don’t want to get into an argument between Playing by Ear and Playing by Music, although my preference is that for the majority of songs, playing by ear is by far the best way to encourage worship. The following are just some of the reasons for this:

1. No more paper to turn

One of the biggest annoyances I’ve found is having to reach forward and remove the previous song as it sits on top of the one you’re about to play (one could say to put it into a clearfile and make it easy to turn pages, but I’ve always found glare from overhead stage lights to bring a whole other set of problems with this). Then theres the issue of where to put the discarded music. Some dump it on the floor (for a quick solution, I do this) others on the bass amp, and others fluff around trying to slide it in behind the rest of the music.

All of this however leads to what I call “Stage Distractions”, where ongoings on stage impose unnecessary distraction from the worship that is brought. These distractions should be kept to a minimum in worship services, so that the people can focus on God alone, and not your paper flying everywhere.

Now I know this is a touchy area. Whilst the worship team are not ‘performing’ as such, there is a thing called stage presence. This includes things like dress, where tatty shorts and a singlet are not going to enthuse people to worship (its not a science, its a courtesy. There’s nothing to stop people worshipping because it should have nothing to do with what the worship leader wears, but it does…) This stage presence is an important part of encouraging corporate worship.
Now, if you have music on a stand, and all you do is look and read the music, you’re burying yourself in the music. [pullquote]You make little or no connection to the people you are leading, and come across as dull, bored, or not worshipping[/pullquote] (even though you might be!). You will also find it hard to connect with the other musicians and keep in touch with them visually, especially when the worship leader might be indicating to play the chorus again.
By playing by ear means there is no music to follow. It frees you up to look out to the congregation, make connections with them, lift your eyes to heaven to connect with God and in general show that you are worshipping too. While beginners may focus on their instrument in order to concentrate, eventually it is best to look up and out, away from the self involvement. It also allows you to keep in visual contact with the other musicians in your team and see where they’re at.

If you like to be organised like I do, I had all my music in alphabetical order by title, with double ups for songs that might have been referred to by two titles. Keeping it organised meant that finding the music was a breeze, but required about 10-15 mins after each service to put them away, meaning that fellowship afterwards was often a non-event since everyone else had left.
Finding music can often take time before the service, and even more so if one can’t find their copy. Extra copies have to be found and photocopied for them.
Learning to play by ear removes all of these. Whilst it can be handy to play new songs with music, playing without the music can save a lot of time and hassle.

Rather than memorise the music, I like to memorise the key that the music team decide to play a song in. By learning these, it allows for me to quickly cross reference and begin playing without the use for music. The reason for this is because there may come a time where a song might need to be played impromptu. Such an occasion for this was at a baptism, where a visiting family member asked me to play a song off the cuff (the problem being he wanted it in a different key!). Other occasions could include the prompting of the Holy Spirit to merge into a chorus from another song or the like. Having to search through music in a folder would limit the ability to do this (but one of the reasons I kept my folder in alphabetical order for fast finding, should the need arise).

5. You can Worship too

Most of the set, you focus on the music, trying to get it right. It requires concentration. It requires your attention. While playing by ear requires just as much concentration, by developing the skill and becoming better at it will free yourself up to worship as well. And if you’re able to worship yourself, then the people you are leading will also be able to worship. Now, I’m not suggesting that you CAN’T worship whilst reading worship, because you can – I’ve done it for years. [pullquote]But since playing without music, I have found myself much more able to worship God as well.[/pullquote] Some have argued (and quite rightly) that by having the music in front of you, it is one less thing your mind has to do, freeing it up so that you are able to worship. However, I have found that whilst this theory works for some, that playing without the music is far more freeing than playing with it.

These 5 points are by no means the only reasons. I am sure there are many reasons. I could probably come up with the same number of reasons of why playing with music is beneficial. As I have stated, this is merely my reasons why I prefer to play without relying on music when playing in a worship team.